How to start... where to start?  Remember how the earth has to orbit once around the sun to make a year?  How many times does the earth rotate during that time?  365.242 days.  Unfortunately, the amount of rotations in a year can't be changed; we can't add or subtract days for our convenience. 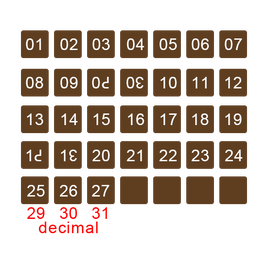 Since we have approximately 265 days in a year, we would start off by cutting that number into 4 quarters, one for each season.

That gives us 26 days with a remainder of 4 or 5 extra days (depending on the year).  We could put 1 extra day on the end of each season which would solve the 4 left over.  As for the last day if it's required, we will put an additional day on the very last month of the year.
26 days /month
27 days on months that end a season
28 days on the very last day if the year has a remainder of 5 days instead of 4

An interesting read I found on wiki:
"January and February were the last two months to be added to the Roman calendar, since the Romans originally considered winter a monthless period. They were added by Numa Pompilius about 713 BC. February remained the last month of the calendar year until the time of the decemvirs (c. 450 BC), when it became the second month. At certain intervals February was truncated to 23 or 24 days, and a 27-day intercalary month, Intercalaris, was inserted immediately after February to realign the year with the seasons."
- Wiki link -

Our calendar usually starts with January, February, and March.  But I found it makes a lot more sense setting March as the first month for a couple reasons.  First, the word march, coincidentally, has a nice meaning in English:
verb (used without object)
1. to walk with regular and measured tread, as soldiers on parade;advance in step in an organized body.
2. to walk in a stately, deliberate manner.
3. to go forward; advance; proceed:Time marches on.
verb (used with object)
4. to cause to march.
noun
5. the act or course of marching.
6. the distance covered in a single period of marching.
7. advance; progress; forward movement:the march of science.
8. a piece of music with a rhythm suited to accompany marching.
Idioms
9. march on, to march toward, as in protest or in preparation for confrontation or battle:
The angry mob marched on the Bastille.
10. on the march, moving ahead; progressing; advancing:
Automation is on the march.
11. steal a march on, to gain an advantage over, especially secretly or slyly.
- Dictionary.com -

Now, mind you, the original name had nothing to do with that, it was instead pertaining to Mars, the Roman god of War.
But, my second reason is that March is the first month of spring.  Spring should come first, it is the beginning of the life cycle, it is the way the calendar was originally set up.  For northern hemisphere dwellers, March has a fitting name to set the year off.  For south hemisphere dwellers, they would also start the year in March, but it would be fall.

If you think this is still unfair, consider that if we start counting months from March to February, we find that September, October, November, and December are the seventh, eighth, ninth, and tenth months respectively.  We could rename all the months, but that would break tradition.

Originally I wanted to organize 26 into a 6x5 grid, but I realized how important the number 7 is for many traditional reasons.
With that being said, It would look something like this: